Thousands of Roblox accounts hacked in support of Trump reelection

07/03: Update below. This post was originally published on June 29th.

A hacking campaign is targeting Roblox accounts to support President Trump in the upcoming U.S. Presidential elections in November.

Roblox is an online gaming platform that allows members to create games and publish them for others to play. With over 100 million monthly active users and consistently in the top hundred sites globally, Roblox is an immensely popular gaming platform.

While used by people of all ages, Roblox appeals more to younger children ranging in ages between 9 and 14 years old.

To customize their gaming experience, players can purchase skins that change the appearance of their in-game avatar using t-shirts, hats, and other accessories.

Targeted at children, once the hacker gains access to the account, they modify the About section of the profile to read, “Ask your parents to vote for Trump this year! #MAGA2020.” 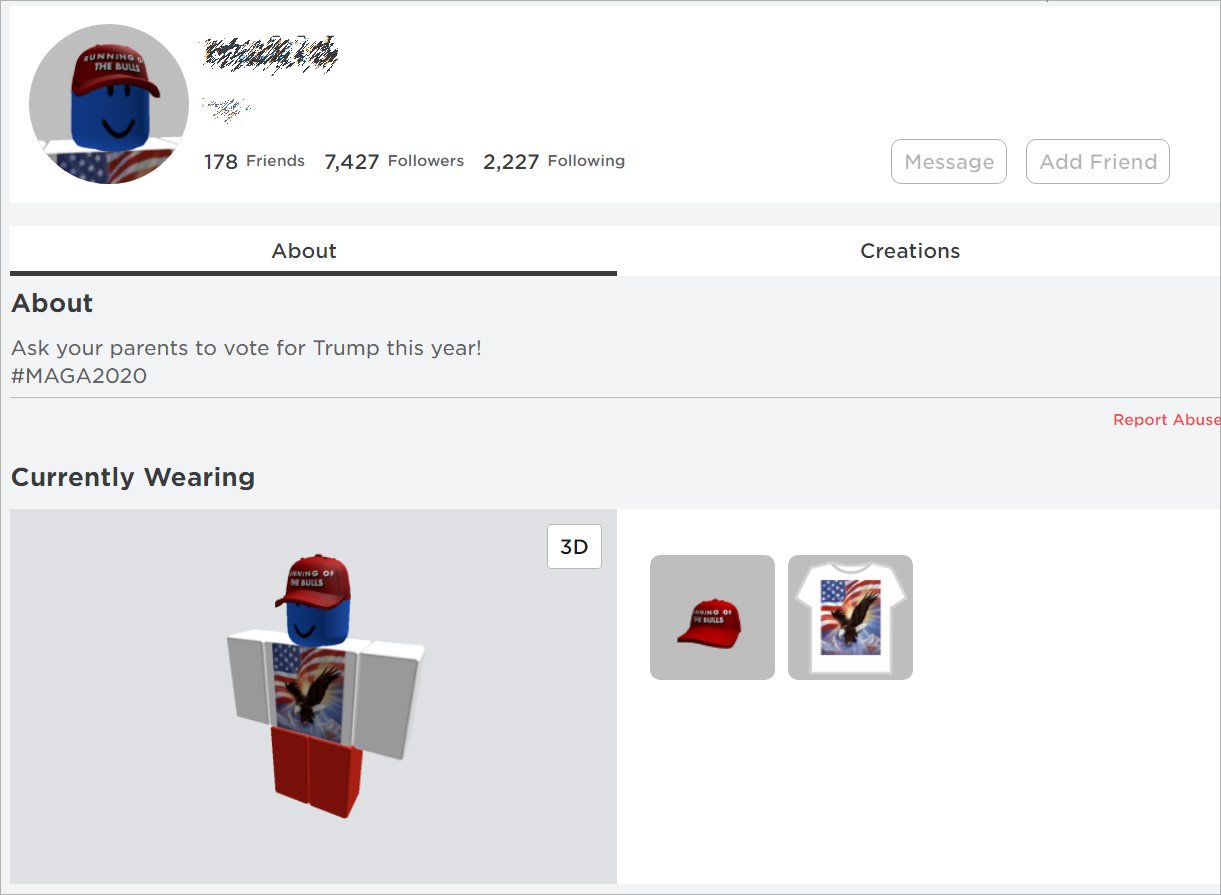 As part of this attack, the hacker will purchase two free clothing skins and add them to the hacked account’s avatar to represent what the hacker perceives as a President Trump supporter.

The first is a red hat with white text stating “Running of the bulls”. When seen on a Roblox avatar, at first glance it looks like a Make America Great Again (MAGA) hat that is commonly worn by Trump supporters.

Skin meant to be a MAGA hat

They then add a patriotic ‘American Eagle’ t-shirt containing a bald eagle and an American flag to the avatar.

When BleepingComputer first spotted this campaign on Saturday, there were approximately 500 accounts indexed in Google that had been hacked.

At the time of this writing, there are now close to 1,000 accounts indexed in Google that have been hacked.

BleepingComputer has contacted Roblox but has not received a reply at this time.

07/03 Update: Since Bleepingcomputer broke this story on June 29th, the amount of accounts hacked to show pro-Trump messages have doubled to over 2,000 accounts.

In addition, BleepingComputer has found an audio file being offered on Roblox titled “Vote for donald trump” that contains the same “Ask your parents to vote for Trump this year! #MAGA2020.” statement in the hacked accounts.

This audio file is created by a user named ‘Bird_Dev’, and when listened to, is clearly the voice of a younger child. While it is not known if this audio file is linked tot the attacks, they suspiciously use the same slogan and the audio file uploaded on June 27th, 2020, which was around the time the attacks started.

There has still been no update from Roblox regarding these hacks or what they are doing to stop them.

What should affected Roblox users do?

If your Roblox account has been hacked, you should attempt to login to the account and change your passwords to a more complex one.

For those who do not remember their passwords, affected users have told BleepingComputer that their emails were not changed, and users could perform a password reset to gain access to the account again.

In addition to using a secure password, it is strongly suggested that users enable 2-factor authentication on their Roblox accounts for better security.

Get Roblox hacks for free on freecheatsforgames.com