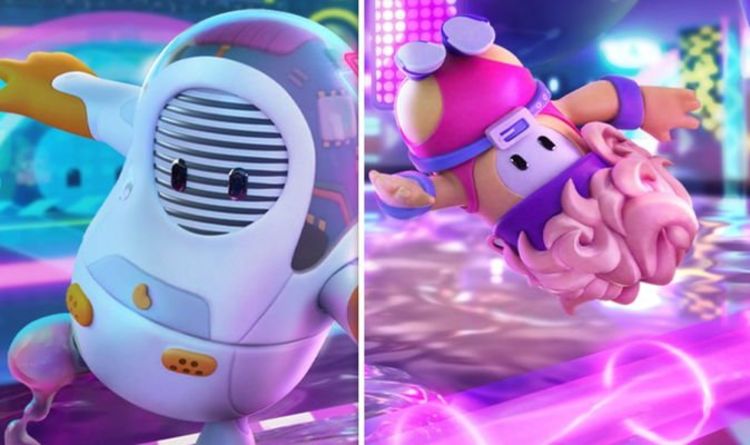 The Season 4 release date is live on PS5, PS4 and PC, which means new game modes, new gameplay features and a whole host of bug fixes and tweaks.

According to the Fall Guys Season 4 patch notes, headline new features include the Basketfall game mode, which sees teams attempt to dunk as many balls as possible.

That’s on top of other new modes like the team-based Big Shots and Power Trip, the latter of which involves grabbing batteries and painting floors.

New Gauntlet levels – which are usually the best – include Skyline Stumble, Short Circuit, Hoverboard Heroes and Roll On.

In addition to new levels and modes, Mediatonic is also adding all-new team-based round types.

Squad Race tasks players with scoring points for your team by crossing the finish line. The team with the lowest point tally is eliminated.

Then there’s Squad Survival, which is all about staying out of the slime for as long as possible.

– Log in each day to receive new Challenges to earn bundles of Fame and Crown Shards!

– Score points for your squad by crossing the finish line- The higher your position, the more points you earn!

– The lowest scoring Squads get eliminated, so every Squad member’s performance matters!

– Score points for your squad by staying out of the slime! The lowest scoring teams get eliminated.

• Beans are sturdier. No more ragdolling when another bean breaths in your direction or brushes past you in mid-air

• Fixed some ragdolling and excessive jumping issues in some rounds. For example, endless ragdolling in Hex-A-Gone after colliding with another bean

• Fixed errors related to ledge-climbing in some levels like Wall Guys, such as sweat animations failing to play, and inability to climb a ledge when a flipper is present

• Post-elimination flow: you can now quit at any time after being eliminated, no more waiting for the next round to load

• Fixed text displaying that 40 players are needed to start a game on playlists with restricted numbers (I.E Hex-a-Gone Trials)

• Improved victory moment and flow at the end of episode

• PS4: Fixed the blurred surrounding area of a Fall Guy on PS4 Pro

• PS4: Fixed memory issues on Base PS4 when opening the customiser with all cosmetics unlocked

• PS4: improved performance and stability in the menus and on certain rounds

• PC: Fixed ‘Back’ and ‘Random’ buttons not working in the Customiser menus with the mouse