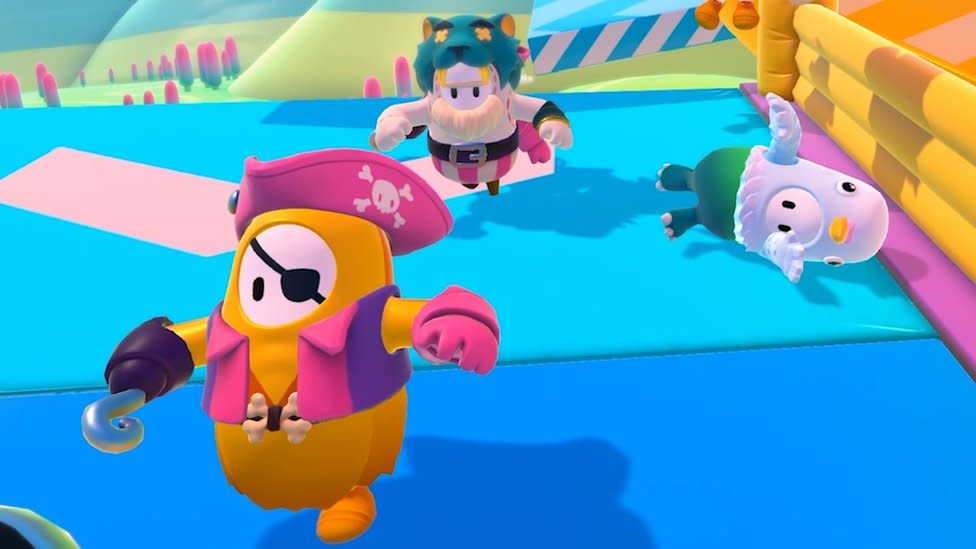 Mediatonic was founded by two students at Brunel University, and has offices in London, Brighton, and Madrid.

The company said being bought by the maker of Fortnite was “a huge win for Fall Guys” and other games.

Epic said recently announced versions of Fall Guys for Xbox and Nintendo Switch would go ahead as planned.

Fall Guys was released in mid-2020 and quickly became a hit, with millions of players navigating its crazy-golf-style obstacle courses with their colourful “jellybean” characters in a chaotic battle royale.

Epic previously bought another hugely popular online title, Rocket League, and turned it into a free game with enhanced cosmetics that could be bought. Like Fall Guys and Epic’s own Fortnite, it uses a “battle pass” system under which players can buy a premium rewards ticket a few times a year to unlock benefits.

Mediatonic referred to Rocket League’s success in a blog post about the purchase, writing that “Fortnite and Rocket League already have tons of features we’d love to bring to Fall Guys [such as] account systems, cross-play and squad versus squad modes”.

But there was “nothing to announce right now” about whether the game would move to a free-to-play model, it said.

“I expect Epic Games to handle Fall Guys in the same way as Rocket League: get the game on major platforms, enable cross-play and when its sales reach the ‘ceiling’… ultimately go free-to-play in order to maximise its audience,” said George Jijiashvili, a games analyst at Omdia.

And Epic’s experience in keeping a game stable for a huge number of users would be valuable, he added.

But he also said the planned mobile version of the game, set for release in China, might have its prospects hurt.

“It’s unclear if Mediatonic had plans of releasing a mobile version of Fall Guys outside of China, but if they did, the Epic Games acquisition is bound to complicate the matters, given the ongoing Epic Games legal battle with Apple.”

Dave Bailey, one of the former university students who founded the studio in 2005, said “with Epic, we feel like we have found a home that was made for us. They share our mission to build and support games that have a positive impact, empower others and stand the test of time”.

Epic Games’ founder and chief Tim Sweeney was a little more cryptic, saying: “It’s no secret that Epic is invested in building the Metaverse, and Tonic Games shares this goal.”

In science fiction, the Metaverse is the idea of a virtual reality beyond our own, a shared digital space that is bigger than any one game. Fortnite’s experiments in concerts and multimedia are sometimes seen as a step in that direction.

“As Epic works to build this virtual future, we need great creative talent who know how to build powerful games, content and experiences,” Mr Sweeney said.