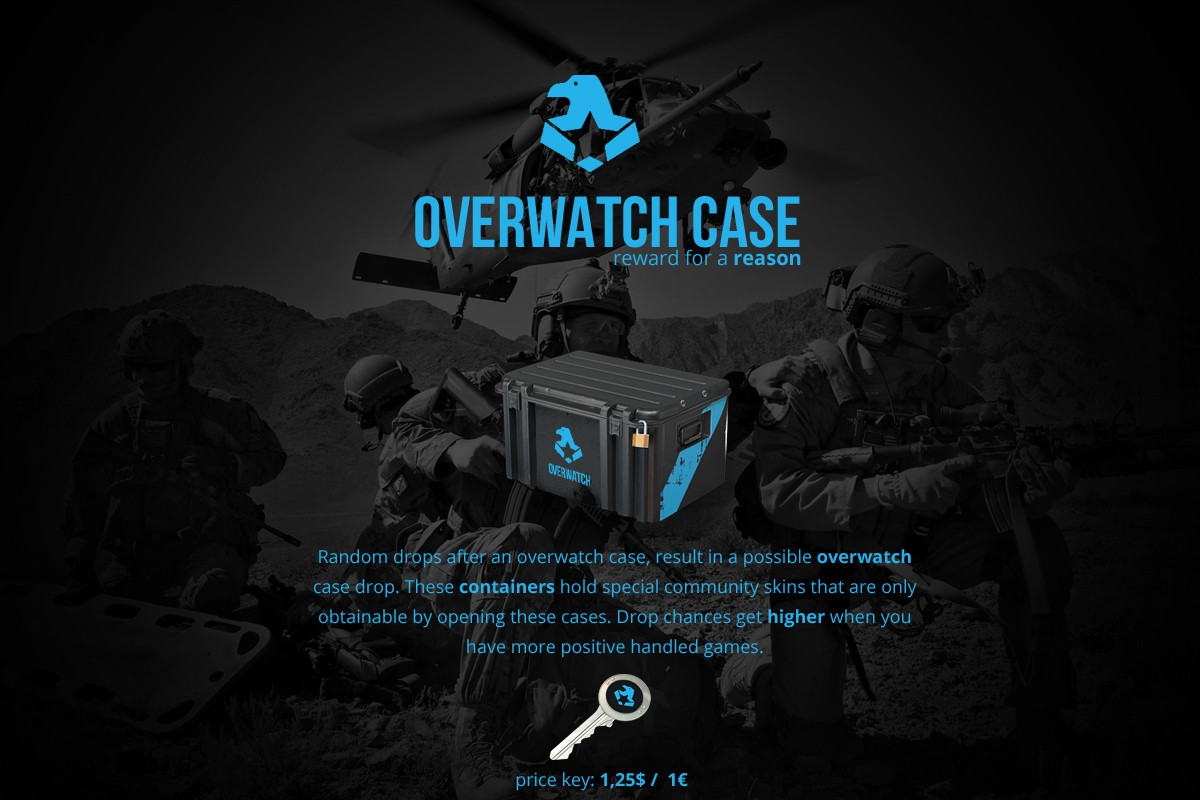 How to get CSGO Overwatch

If you reach this page it means that you want to help the CS GO community to get rid of cheaters and that is great!  A big thanks to you for helping the community.  So let’s get started.

What is CS:GO Overwatch?

CS GO Overwatch is a feature added by Valve that allows experienced players to judge demos of reported players and collaborate with the developers to find and punish  cheaters and griefers from the game.

When players get reported their in-game demos are redirected to Overwatch so they can be investigated. A verdict is applied based on opinions of several investigators and the suspect can get banned or not.

Overwatch is not a flawless system because a lot of players including professional players have reported to be unfairly banned by investigators. I believe that most of the Overwatch bans are fair but unfortunately there are some cases of unfair bans. Hopefully Valve will improve this in the future so there are no doubts when players get banned.

The VAC system was implement a long time ago and it works in a very different way of CS GO Overwatch.

VAC is a system that detects software that you are using on background while playing. Cheating software leaves a trail of data on process memory that can be identified as cheats.

VAC has a built list of cheating software that keeps getting updated from time to time so new cheats can sometimes be used a few days without getting noticed but even if you stop using it or used it only once you can get banned.

Overwatch bans are applied only by community investigators general opinion. The demos supply a lot of information that allows investigators to decide if they the suspect has enough evidence to be convicted or not. I think that most of false bans are probably due to human error because less experienced players might not think about sound information, game sense and team calls and think about it as wall hack.

Requirements to be a CS GO Overwatch investigator

There’s no oficial information from Valve on the requirements needed to become a investigator on Overwatch but the community discussed about it and reached to some conclusions:

This requirements may vary because Valve stated that they pick up investigators based on number of competitive wins, steam account age, number of playtime hours, skill group, low rate of reports and other factors.

How to start an Overwatch?

You won’t get any notification when you become Overwatch investigator. The only change is that a new module will appear below your top menu on CS GO main overview.

It will show a button “Download Evidence” and the text “You have a pending case to review”. Once you press the button it will download a demo from a reported player.

After the download finishes the button will change to green and it will say “Review Evidence”.

You will now see the demo on first person of the reported player. You can’t switch to other players or do free camera. The review takes around 10 minutes.

The name of the reported player always shows up as “The Suspect” and the other players in the demo receive random names to maintain privacy of the players.

How to analyse the suspect?

Aim assistance is related to AimBot cheats. Aimbot is a external software that corrects and pushes your crosshair towards the enemy when he’s on sight.

There are some that are easy to spot because they correct the crosshair in milliseconds which is impossible for a human to react that fast. There’s also something called silent aimbot because it lets the cheater control the mouse and the software only aims towards the enemy when the crosshair is real close so it doesn’t look so much suspicious. This one is hard to spot if configured right.

Vision Assistance is related to WallHack cheats. Wallhack is a software that allows you to see the players through walls giving the advantage of knowing every enemy position.

This is the most used cheat on CS GO and it requires much of your attention to spot if wallhack is being used or not. When the suspect kills someone think if the enemy was on common spot, if he made any noise, if the suspect’s team could have called his position or if it’s simply game sense.

Unexperienced investigators may acuse someone of wallhacking very easily. As you start getting better on CS GO you will understand that you need to check every corner, you will also understand the time needed for a enemy to push all around the map to your back and also that in a lot of situations when a enemy spots you other enemy may peek you on other angle. So this is all game sense and you should take that in consideration when judging someone playing.

I found on Overwatch that some Wallhackers are very bad at hiding their cheats. Check the suspect crosshair placement. Does he tries to keep the crosshair at head level most of the time or only when someone is behind the corner. Does he check corners where enemies could be hiding? If he only does it when someone’s there then he’s probably wallhacking. Experienced players usually check behind every door, box, corner and other possible hideout for the enemy.

Other external assistance is referred to speed hacking and bunny hoping assistance.

Speed Hacking is a cheat that increases your velocity in game but honestly i don’t think such thing exists on CS GO since i never spotted anyone doing this in 2000 hours of gameplay.

Bunny Hoping is a feature that increases your velocity in game by doing consecutive jumps and strafes and it’s possible to do in game without any cheats but it’s really hard to learn and control. Even experienced bunny hopers are able to do just a few hops in a row.

So if you see a suspect that keeps doing a perfect bunny hop during the whole game it’s probably due to some software assistance.

Griefing is not related to cheating. It”s about how the suspect acts with his team mates. Did he kill someone on his team on purpose? Is he blocking, flashing, nading or by any mean disrupting his team mates on the game? Is he away from the game or just going around and trolling? All of the situations that i just mention are griefing.

After watching some rounds the demo will end and you will be redirected to CS GO main overview again with a pop up called “Overwatch Resolution”. You will be asked to judge if there enough evidence to convict anyone on the 4 factors i mention above: Aim assistance, Vision Assistance, Other External Assistance and Griefing.

Remember if you don’t have enough evidence to acuse a suspect just choose “Insufficient Evidence”. If you have just a feeling that someone’s cheating that’s not enough. You have to be 100% sure to convict anyone.

Is there any reward for doing CSGO Overwatch?

Every suspect demo is analysed by several investigators and then after a lot of opinions are gathered the suspect will be claimed innocent or guilty. If your decision was correct you will earn XP for your CS GO rank. Remember that this CS GO rank it’s not the Matchmaking rank. The XP is added to the rank that gives you the service medal when you reach level 40.

Also when you do right judges your investigator score will increase meaning that your future decisions will have more impact on final verdict. And it’s also rewarding when you know that you are helping the CS GO community to be cheater and griefer free.

So after saying all this, don’t just do Overwatch without caring about it because it won’t give you XP if you were not fair and you can even be removed from Overwatch investigators for doing that.

Some tips for your CS:GO Overwatch investigations:

Fortnite Spoofer Free – Get Your HWID Unban in Fortnite Instantly, 2021