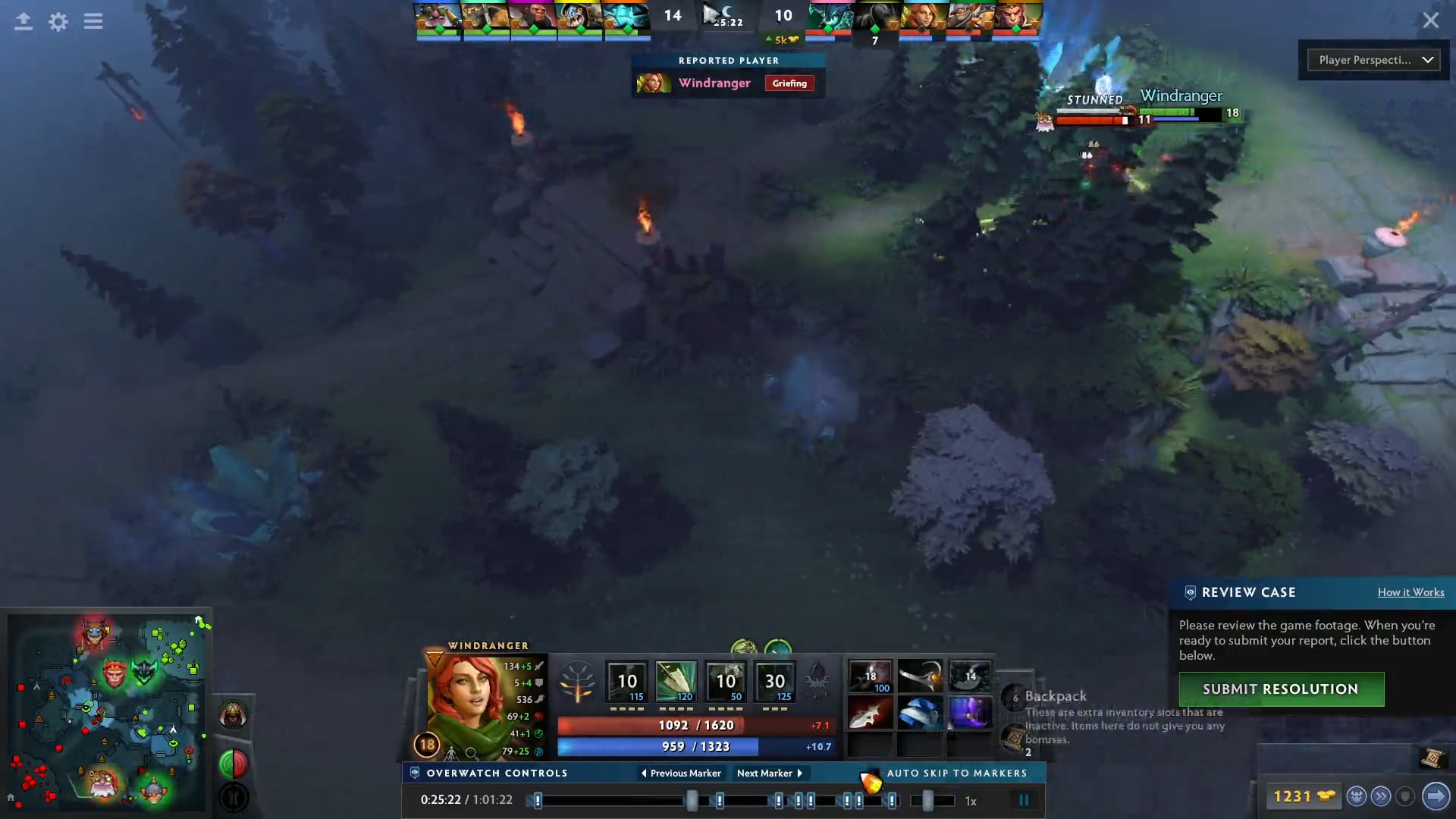 I had a pending Overwatch review of a Windranger reported for griefing, but she’s very very obviously scripting (camera is at weird angles, with her often off screen, jumping erratically back and forth, connecting skillshots without even having the camera on the enemy hero, cursor jumping from creep to creep, perfectly dewarding right next to enemy wards), but I can’t report her for cheating. At one point she literally blinks right on top of a sniper in fog of war, instantly connects orchid, vyse, stun and ult.

While trying to finalize my verdict and report the player for cheating, I kept getting the “An error occurred while submitting your conviction. Please try again later.” when trying to press the submit button.

I got pretty frustrated over this, ranting about not being able to report due to an overwatch bug, and my girlfriend, overhearing that, said “they probably have cheats that stop you from reporting them.” So, I got curious and started googling “dota 2 cheats bypass overwatch”, from surface level, I didn’t find anything about Dota, but several cheat forums came up with tutorials as recent as December 2020 on how to bypass overwatch on CS:GO.

“Despite these efforts to tackle the presence of hackers, during an interview with YouTuber “Sparkles,” a cheater talked about some of the methods cheaters are using to manipulate Overwatch. Kessi, the cheater who spoked about this topic, said that they developed some tools that can whitelist specific in-game IDs as well as influence the Overwatch verdicts. Kessi added that, for him, the workarounds gave him the confidence to unashamedly cheat, “I don’t wake up in the morning wondering if I’m going to get banned, even after a really cheeky couple of games. At this point, I can’t see how I’m going to get banned.””

That snippet was from google cache of the first result of my “dota 2 cheats bypass overwatch” search. The original website is down, but that’s what I got out of the google cache. Could something like this be going on in Dota? Are specific game ID’s being whitelisted somehow by cheats? I didn’t want to get too deep into the cheats forum rabbit hole, as I’d rather avoid shady websites.

This is the game, found by punching in the combos to OpenDota:

When you try to look up the match replay in game, it says “Match data not found” and OpenDota itself tells you “The replay for this match has not yet been parsed. Not all data may be available.” That’s rather unusual for a game that concluded 6+ hours ago. To make it clear that this person is cheating, I’ve attached a video recording of the replay, since it cannot be retrieved from in-game. I haven’t encoded video in years, hopefully this comes out at passable quality.