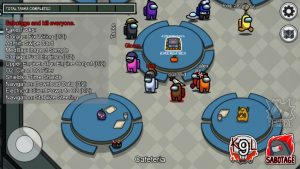 How to Play Among Us: Game Guidelines for Crewmates & Impostors

Download How to Play Among Us: Game Guidelines for Crewmates & Impostors for FREE

Among Us is a hidden role/deduction game by Innersloth LLC. It has simple mechanics. As a crewmate, all you have to do is to prepare your spaceship and complete tasks by navigating the map. On the other hand, there’s an impostor that wants to sabotage your plans and kill everyone. Are you ready to play this game and get stuck in space? You might even find yourself getting evicted. This Among Us guide will help you start the game smoothly and become a good crewmate or impostor.

Have you ever heard of the card game’s Avalon and Wolf? There are specific roles given to each person, some of them bad, and some are good. The objective of the game is never to let the bad ones win the game. The only problem is that you will never know who the good or bad ones are. It’s all about deception and hidden roles. You have to be careful about showing your emotions, or else you might accidentally out yourself.

Avalon and Wolf have the same mechanics as Among Us. How Among Us works depends on the players. You can do your best to convince your teammates that you aren’t an impostor and shift the blame to someone else. Here, you’ll learn how Among Us is played. Play Among Us now and learn the basics right now. Let’s see if you’re a good impostor or good at spotting the impostor.

Installing Among Us on Your PC

Before anything else, playing Among Us on your PC will give you an even better experience. Who knows? It might help you spot the impostor easier. All you need is a PC and a stable internet connection to finish the download process. Here’s how you could install Among Us on your PC:

With these three easy steps, you can already enjoy Among Us on your PC. You’ll see how fantastic your gaming experience will be once you start playing.

What the Game is All About

Among Us is the perfect multiplayer game. You can play with your friends or with strangers through the online option. Four to ten players can join the game, and there can be one to three impostors. The role of an impostor is to kill all remaining crew members without catching the attention of the crewmate. Moreover, they can sabotage the ship’s equipment as well to win.

On the other hand, it is the job of the crewmate to finish repairing the ship. Once they do, they win the game. However, there are impostors lurking around killing them. Which is why another objective of the crewmates is to eject the impostors. Every time the crew finds a dead body, they report it, and they discuss it during their meeting. Everyone, including the impostors, gets to join the discussion and talk about the alibis and who they think the impostor is. Once they are done voting, the one with the most votes gets ejected from the ship.

Setting Up Your Controls

To make playing Among Us easier, you should set up your controls first. After downloading the game on your PC, there are pre-made controls set up for you. But, you can edit it out to what you think is much more comfortable. Press the F1 key to bring up the control settings. Click on the Pen icon on the lower right of the screen to open the Edit mode.

Add and customize the keys on the screen while on Edit mode. Choose from Swipe, Default Buttons, and D-pad. The best controls are D-pad and two other buttons for Report and Use. For chatting, there is already a fixed keyboard.

Things to Know Before Playing

Now that you’re ready to play the game, all you need is to connect to the internet if you want to play Online or Local for local gaming with friends. You can Host a game, find a match through Public, or join a Private game by entering a code. There will be one to three impostors, depending on your choice or the host’s choice.

In addition, if you’re not ready to face real players yet and you want to practice, you can go for freeplay. Here, there are NPCs that will help you hone your skills as a crewmate or an impostor. This is crucial, especially to the beginners or those who aren’t good at the game.

There are three maps to choose from. The primary map is The Skeld, the first map from 2018 and the most common among the players because of its design and tasks. Next is MIRA HQ, which is in Earth’s atmosphere and is the headquarters of MIRA. The new map is called Polus because it is in Planet Polus as the planetary base.

How to Play Among Us

As a crewmate, you need to complete tasks to fill the gauge. You can also react to an impostor’s sabotage on the ship. But remember, being wary of your surroundings will help you in this game. Especially since you’ll never know who the impostor is until the big reveal. Which is why you have to be careful who you are with. You’ll never know the one beside you fixing wires is actually an impostor who’s faking it and ready to strike. You can only win if either the impostors are ejected or you will be able to finish the tasks.

Meanwhile, as an impostor, you need to hide your role and blend in. You can sneak through the vents and pretend to run tasks while sabotaging the ship to confuse the crew. You can also close the doors and trap the crew. Lastly, kill them in between cooldowns. Remember to prove your innocence or accuse another crew member.

Both the crewmate and impostor can monitor activities from the security or the admin. It is up to you how will you use it to your advantage. Additionally, both can report and call for an emergency meeting as well. It is now up to the discussion whether the one who called for it is the impostor or someone else.

Voting starts during the discussion. The one with the most votes will be ejected or killed. You can also skip voting if you are not sure as to who you want to vote for yet.

Once you die in the game, don’t worry about missing out on the fun. You can still help finish tasks as a crewmate while sabotaging as an impostor. The game isn’t over until the verdict is out. That’s why this game provides neverending fun entertainment to the players.

Being a host means you can control different aspects of the game. First, determine who you want to play with. If you’re in a public room, you can just ban them if you don’t want them. But just remember that once you’re in a public room anyone can get in. Meanwhile, in a private room, you can give the code to your friends. You can also change the settings if you want to add more tasks or change the vision of the players. Lastly, you can kick players or ban them if someone is being rude or is spamming.

Among Us Hack 2020: All the Info New Hacks, Now CREWMATES Can Vent Like An Impostor.

What’s so bad about believing every man cheats?