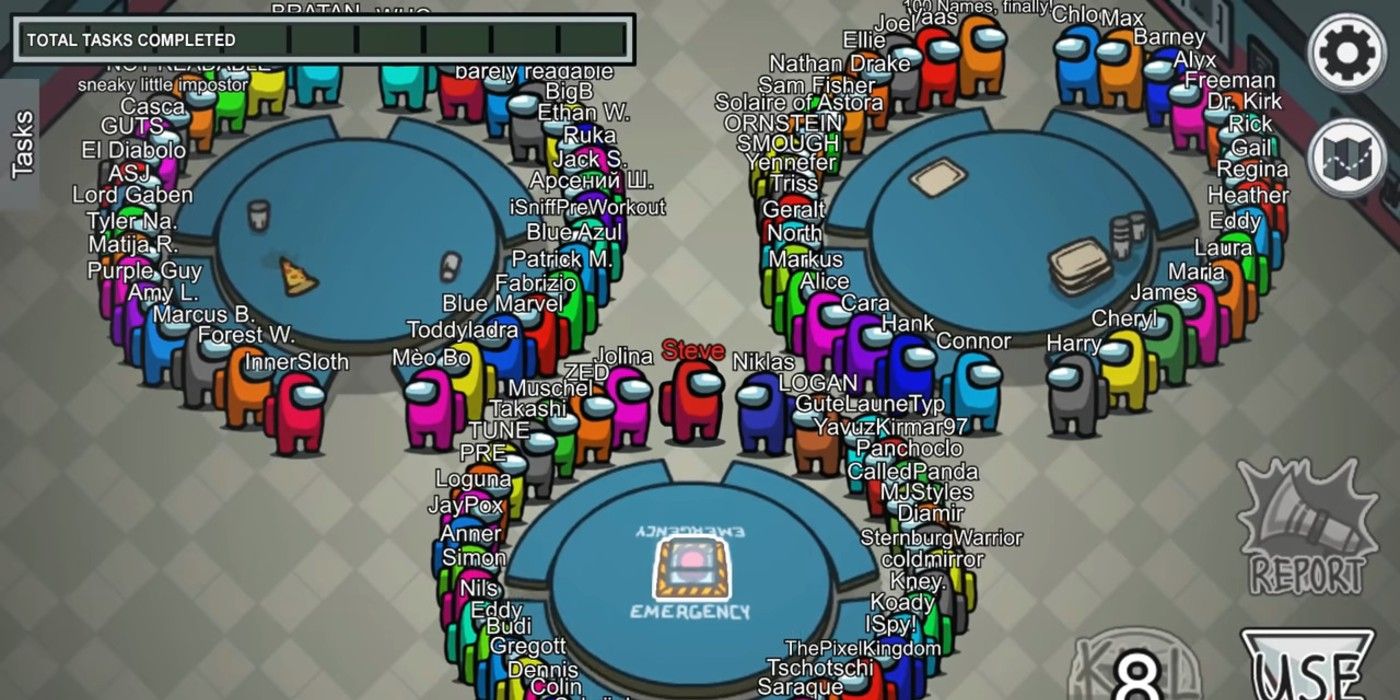 Players who have seen popular streamers and YouTubers play Among Us with 100 players can host their own 100-person lobby by installing a new mod.

While players wait for the new Airship map to drop for Among Us in 2021, they can change up the experience by installing and playing with mods. Mods can change the game experience dramatically for players by adding new roles for crewmates, or more subtly by adding proximity voice chat and audio. One new and popular mod gaining traction increases the size of the lobby, often to hilarious, unbalanced, and confusing effects. The classic version of Among Us involves up to 10 players running around The Skeld, Polus, and Mira HQ as crewmates and Impostors. Having a full lobby can be chaotic, with accusations flying and players being killed or ejected from the airlock. With the 100 Players Mod, the game becomes even more chaotic.

Related: How to Play the New Doctor Mod for Among Us

Players may have seen the Among Us 100 Players mod featured by popular streamers like Mr. Beast and Socksfor1. Normally, players have needed to join Socksfor1’s popular Discord server to play Among Us this way. However, if players install the mod, they can host their own 100-player lobbies and initiate the chaos. The mod is easy to install and, though the game does not have very good crewmate-to-Impostor balance, it can still be a lot of fun. Here’s how to install and play the Among Us 100 Player Mod.

The 100 Player Mod CodeIsNotAmongUs zipped file is available to download online. Prior to installation, players will need to make sure they back up their game files. The mod will take the place of the typical Among Us files, messing up the standard Among Us game. Players will have to uninstall the mod when they are done using it, then reinstall it if they ever want to host another 100 Player lobby.

Right now, only PC players can download and install the 100 Player Among Us Mod. Players on iOS, Nintendo Switch, and Android will not be able to use the mod.

To install the 100 Player Mod for Among Us:

Players should see the option of hosting a 100 Player lobby when they launch the game if the installation was successful. Players should also see Socksfor1 printed in red at the bottom of their screen once in the lobby, as this mod is hosted on Socksfor1’s private server. The only other thing players will need to do is find a group large enough to start their massive game.

Among Us played with the 100 Players Mod is not that different from any regular game of Among Us. In his video from October 15, Socksfor1 mentions he had to change his name so he wouldn’t be ejected right away by his friends and fans. He said he and his friends played with this mod with their mics unmuted because it did not make much of a difference whether or not they were off thanks to the chaos. They also adjusted the game settings to eliminate Emergency Meetings so things didn’t get too hectic. Players using this mod should plan to have 10 Impostors or so to keep a similar ratio to regular games.

If players try to play the regular version of Among Us with the mod still installed, they might experience duplicate colors or other bugs that ruin a lobby, so it is best to uninstall the mod when players are done using it.

Next: Among Us Color & Skin Options Can Confuse Other Players

Among Us is available for PC, Nintendo Switch, iOS, and Android devices.