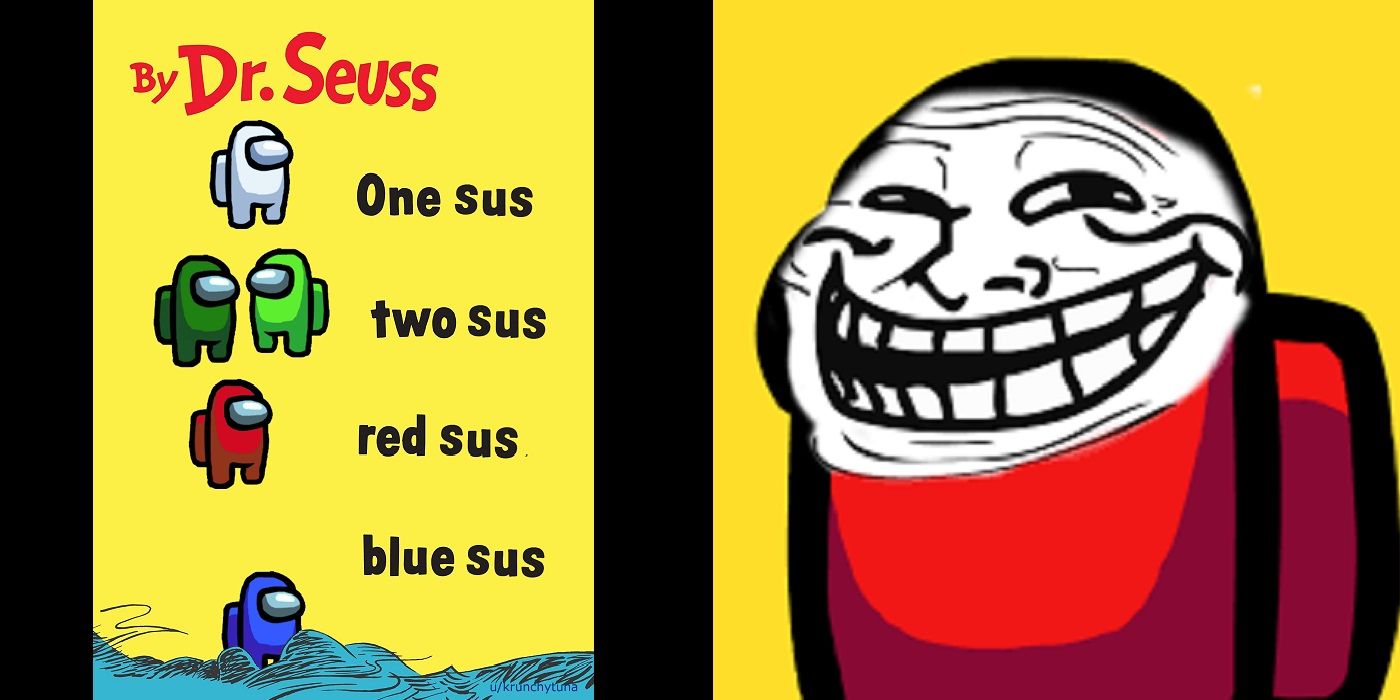 10 Hilarious Among Us Memes

Among Us is not only a popular video game, it has become a pop culture touchstone all its own—inspiring new slang (“sus”) and countless memes.

Among Us is a popular game which requires Crewmates on a space ship or space station to complete tasks and to root out the impostors, loosely inspired by the classic horror movie The Thing. Crewmates have the advantage of being able to work on tasks whether they are dead or alive. Impostors, on the other hand, need to eliminate all of the Crewmates before the Crewmates catch them or complete all of their tasks.

An Impostor’s job is made easier thanks to the fact that they can sabotage the ship and travel quickly through vents. Among Us has inspired countless memes that both pay tribute to and lovingly poke fun at one of the biggest games of the moment.

Although these macarons are cute, the text reveals that soon, two of them will be filled with wasabi instead of matcha. It is an evil yet accurate way to portray Impostors, as a single moment of trust can lead to disastrous results.

Although the person who created this meme told us their chaotic plans, they probably did not inform the people eating them that there would be consequences. After all, people could easily avoid a mouthful of wasabi by tasting a tiny bit of it or by checking how it smells if they knew how dangerous these are.

These pumpkins of an Impostor in a witch hat and a deceased Crewmate really capture the spooky feeling of Halloween. By itself, it would be impossible to tell if the one in the hat is an Impostor or not, but paired with the unfortunate Crewmate, it is easy to tell what has happened here. These have been carved so well that the characters are instantly recognizable, and the dark room gives off the terrifying feeling of being alone with someone in Electrical.

This is a relatable meme, in which Brown looks at a daunting list of tasks that need to be completed on the ship. This is reminiscent of the chore list that many people have received from their parents, and although parents may claim that there really isn’t much to do, these chores usually take all day to finish. Thankfully for Brown, the tasks in Among Us are pretty simple to complete. Unless he has to do a card swipe, that is.

7 Peace Was Never An Option

Brown makes a seemingly innocent request for a peaceful round. Given that he asked to see a win through task completion, Brown was most likely not the Impostor. However, the rest of the crew either thought that Brown was trying a clever Impostor strategy, or they were just so evil that they decided to take away any chances of him surviving. In Among Us, people rarely want peace, as it takes away the fun of the game. Hopefully Brown gets another chance to win by completing tasks.

Throughout most of the game, Crewmates have no idea who is an Impostor and who is not. As a result, they have to assume that everyone that they encounter might be an Impostor. Crewmates usually feel more secure either in a large group or when they are alone.

RELATED: The 10 Best Comic Book References In The Simpsons

However, being alone with one other person gives a Crewmate a sense of fear, knowing that there is a chance to get eliminated by an Impostor. Even worse, the Impostor could probably avoid getting caught for their crimes.

This is based off of the Mario and Luigi meme, in which they express two vastly different opinions. During the voting process, there are almost always two types of people: people who give solid, logical arguments, and people who accuse a person without using any sort of evidence to back up their claims. Sadly, showing any signs of intelligence can make someone suspicious to the other players. Logical arguments sometimes lose to baseless accusations, which is what makes this game both chaotic and ridiculously enjoyable.

Seto Kaiba, using the kind of spelling and grammar often seen in Among Us, gives a rather solid argument that no one should vote him out, especially considering the fact that no one can prove that he is the Impostor.

In typical Yami Yugi fashion, Yugi pulls out a card and states that he is so confident that Kaiba is the Impostor that people should vote him out if he is wrong. This argument usually works, and Kaiba is quickly revealed to be the Impostor.

Based on the classic Dr. Seuss book, the colored fish being counted have been replaced by Crewmates instead. The title of this new book is an accurate depiction of the game, considering the fact that everyone is suspicious until proven innocent. People can prove their innocence through vouching, Medbay tasks, or by finding the real Impostor. The cute cover of this book makes people wonder what the pages inside look like. Although there may never be a completed version of this book, the cover implies that Blue is definitely sus.

This is one of the most hilarious ways in which someone has caught an Impostor. It is hard to tell whether Dobbie really fell for this: Dobbie could have easily typed too fast, or perhaps Dobbie embraced the loss with open arms.

RELATED: Does Mirio Lose His Quirk? (& 9 Other Questions About The Character Answered)

At the end of the day, Pom pom must have felt incredibly smart to have caught the Impostor so easily. Although this is not a typical strategy by any means, it may be worth giving it a shot at some point.

1 Cheating In Among Us

Sadly, like in many other games, people have been known to cheat in Among Us. Shamelessly, they will be in a private call with a friend, and if that friend dies, they won’t hesitate to reveal who the Impostor is. There is no honor or fun in winning this way, and sometimes the other Crewmates will have the decency to vote out the people who attempted to cheat. Being revealed this way is the worst way to lose the game as an Impostor, wasting all of that stealth and hard work.

NEXT: 5 Foolproof Strategies In Among Us (& 5 Guaranteed To Fail)

Next 10 Anime Characters Who Became Anti-Heroes Halfway Through

Jasmine Venegas is a writer based in Las Vegas, Nevada. She graduated from UNLV with a BA in English, and has experience in tutoring elementary and high school students. She now writes list articles for CBR. She enjoys reading and drawing.

Read Next in gaming

All the best shortcuts & hacks on FM 20